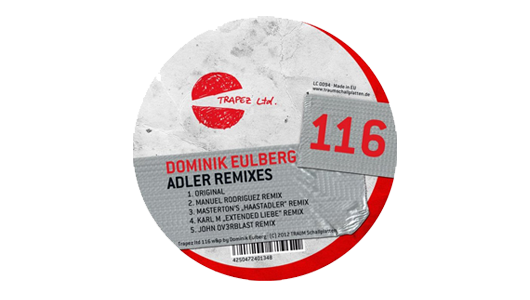 It's awesome. My remix of Dominik Eulberg's track "Adler" was released on Trapez Ltd, a division of TRAUM Schallplatten. The remix is named after a massive eagle that lived on the South Island of New Zealand.

What the the people at TRAUM said about it:

The original was released 2004 on Trapez ltd so after more than half a million clicks on YouTube and a decade of requests for this track, we don't have to introduce „Adler“. […] Masterton has remixed „Adler“ in a Traum way creating lingering melodic sounds very pleasant and seducing … that alternate with the original samples.

All mixes are great but Masterton's mix is really good.

Good work! my favourite is the original, from the remixes I like Masterton`s Adler "Haasstadler" remix most, the others are good too, but this one has more soul and a little bit more substance.

The track is available on Beatport.