5 Magazine is North America's only magazine dedicated exclusively to House Music. For me it's a great honor that my EP "Closer" was reviewed in the printed edition of the April issue alongside with reviews of Detroit Swindle, Al Gobi, Luaka Bop and Blunt Instruments. 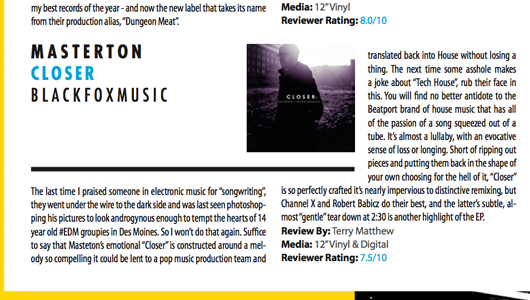 The last time I praised someone in electronic music for "songwriting", they went under the wire to the dark side and was last seen photoshopping his pictures to look androgynous enough to tempt the hearts of 14 year old #EDM groupies in Des Moines. So I won't do that again. Suffice to say that Masterton's emotional "Closer" is constructed around a melody so compelling it could be lent to a pop music production team and translated back into House without losing a thing. The next time some asshole makes a joke about "Tech House", rub their face in this. You will find no better antidote to the Beatport brand of house music that has all of the passion of a song squeezed out of a tube. It's almost a lullaby, with an evocative sense of loss or longing. Short of ripping out pieces and putting them back in the shape of your own choosing for the hell of it, "Closer" is so perfectly crafted it's nearly impervious to distinctive remixing, but Channel X and Robert Babicz do their best, and the latter's subtle, almost "gentle" tear down at 2:30 is another highlight of the EP.

If you live in the U.S. support 5 Magazine by buying a printed issue. Otherwise get yourself a digital copy.